All you have to know about Chinese food

“DO YOU LIKE RICE or noodles?” one enthusiastic student asked me early on in my teaching career.

I thought about it a moment, having never thought of this question before and answered, “Noodles.”

“Me too,” the boy said excitedly.

The Chinese culture has a solid eating tradition and part of this tradition relies upon eating a “staple” food of either rice or noodles with every meal. The exception to this is if one is having bread with the meal or dumplings.

One thing you will be doing often in China is ordering food in restaurants. This may be intimidating at first, but with practice and exploration, you will find many Chinese restaurants with food you will like.

Many restaurants will have picture menus. Sometimes there will be pictures of dishes on the walls and you will be able to order by pointing to the picture you find most delicious that day. Other restaurants will have some English written next to each Chinese name in the menu. Oftentimes the translations will be humorous. It’s not uncommon to find dishes such as “explode the chicken” or “fragrant fish slivers.”

Eating in China is a casual affair. There is no tipping, so don’t worry about it. Oftentimes one person will order for the entire table, but when out with friends, it’s more common for everyone to order their own dish or for each person to pick a dish and then share.

Usually one person will pay for everyone at the meal with the understanding that the next time you all go out someone else will pay. The exception to this is if you are out with your boss or a superior and in these cases that person will usually pay for the meal. When out with friends, it is common to split the bill. This is sometimes also referred to as “AA” or “Going Dutch” in China. 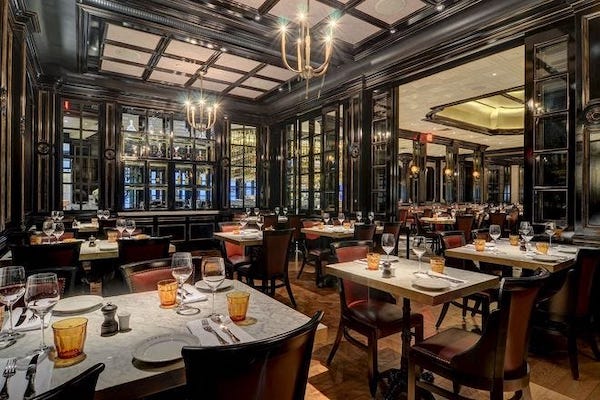 Eating out in restaurants is done family style. There will be several dishes including meat and vegetables in the middle of the table for everyone to share. Each person will have a bowl filled with rice. During the meal, everyone takes from the center with his or her chopsticks. Sometimes fruit may be served at the end of the meal as dessert.

There are many different types of restaurants with specific types of foods. If I am by myself, I will have several restaurants that I rotate between where I can get a meal for 10-30 RMB. It should be noted that food eaten in restaurants can be the same price as food bought in a grocery store. It’s very easy to find food from a small, hole-in-the-wall place that is the same price or cheaper than food found in the supermarket. It’s for this reason that eating out in China is very common. I usually eat out twice per day in China.

When ordering in restaurants, you will need to get the waiter or waitress’s attention if it is busy. You will not have a specific waiter or waitress and because there are no tips, service can sometimes be spotty. It’s for this reason that people will often shout fuwuyuan (waiter) or hold their hand up and snap their fingers. This is not considered rude and is just another China quirk.

One of the most useful Chinese phrases to learn is “Wo yao zhe ge” which means “I want this one.” Use this sentence when ordering. I still use this phrase daily while in China seven years after first arriving.

As was mentioned in Chapter eight, most malls will have a supermarket where you can buy most things you will need to cook and eat.

There are also some products which may freak some people out: strange cuts of meat with lots of bones or fat in it, live fish tanks, live frog buckets, live eels, beef candy, and shrimp flavored chips.

Generally, supermarkets are quite clean and will be great places to get everything you need. Three-fourths of the time I needed to buy groceries in China I went to the supermarket. There are also convenience stores and small supermarkets all over the place, which also sell many of the products above. Prices at supermarkets are non-negotiable.

Wet markets are located all over each city and range from a few people sitting in a back alley selling meat and vegetables to a covered marketplace with more than a hundred stalls selling fruits, vegetables, spices, pork, beef, lamb, chicken, snakes, frogs, crocodiles, and animals you’ve never seen or heard of. If I am cooking something from scratch and don’t need anything extra from the supermarket, I may go to a wet market and buy the fruits and vegetables I need. I’m sure the meat at the wet market is fine, but it’s a little too graphic and dirty for me. The prices at the wet market are the cheapest around and you will probably be able to bargain a little.

In addition to eating in restaurants, there are also many street-side vendors serving all different kinds of food. This type of food will be some of the cheapest you will find, but the quality can sometimes be questionable. 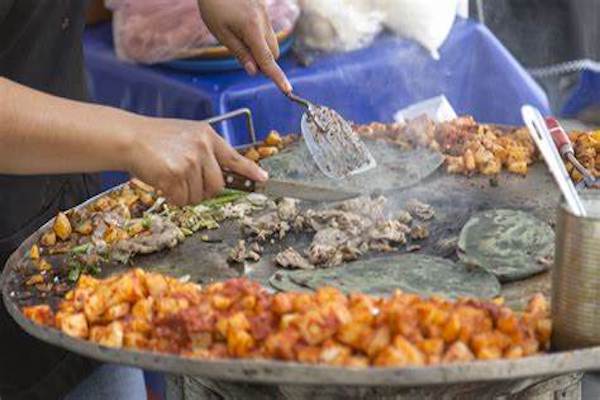 In the mornings, there may be vendors serving up breakfast foods such as porridge, dumplings, or dim sum (small plates of dumplings and other dishes). This is usually very cheap and you will be able to order quite a lot of food for not much money. For example chicken porridge, a side of vegetables, and a small plate of dumplings might only cost you 10 RMB.

After supper, tables will be set up along sidewalks serving up fried noodles, meat, and vegetables. This is served up with Chinese brews as well as foreign beers such as Pabst Blue Ribbon.

Here, for double the price of what you would pay back home you will be able to find spaghetti sauce, sausages, Doritos, many kinds of foreign beer and wine, avocados, canned foods, coffee, and a lot more popular foreign brands. There is a chain of German stores called Metro (Mai de long) and they will have everything you are likely to need. Most supermarkets will also have an import aisle, which will have things like spaghetti sauce and noodles, Nutella, and cereal.

6.FOOD CHARACTERS TO WATCH FOR

Maria was one of the cutest girls I had ever met. She was kind, sweet, feminine, fiery, had an amazing smile, and a great laugh. We were getting along well on our second date and now we were taking a post dinner walk through the back streets of Zhongshan, one of my all time favorite activities.

We rounded a corner passing a Guangdong diaolou, an ancient tower employing European architecture, and Maria started to skip ahead of me towards something.

She made her way towards a street vendor who had some different foods on display through the glass window of his cart. I looked at the food on display, most of it different types of meat.

“What are you getting?” I asked.
“Ji zhuazi.” Chicken feet.
So much for my hopes of a make out, all I could think about was a toenail being stuck between her teeth and me dislodging it by accident and swallowing it later that night.

China has a lot of interesting foods, and below is just a short preview. If you see these characters on the menu, you may want to stay away, or try them depending on your mood that day. 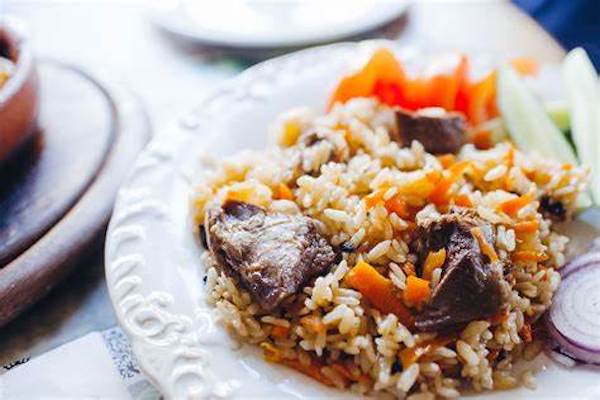 鸡爪子 (ji zhuaji) Chicken feet.
The United States exports a lot of these to China.

鸭脖子 (ya bozi) Duck neck.
A favorite for something salty to gnaw on.

虫 (chong) Worm
There are many types, those I have tried are small and fried, having almost no taste and are crunchy.

You can learn a lot of Chinese characters by looking at menus and ordering food with little effort. When you are at a restaurant, take a good look at the characters. Don’t be intimidated by them. Look for the same character repeated multiple times in each dish’s name. You will be surprised by how many you see repeated. This is because each area of the menu is divided into different types of dishes. See below for characters to look for and what each means.

粥 (zhou) Porridge
Rice and water usually mixed with some meat or vegetables depending on the dish.

肉 (rou) Meat
If the dish has this character in the name, there will be some type of meat present.

饭 (fan) Rice
Many dishes end with this and it means white rice is usually served with it or that it is a type of fried rice.

狗 (gou) Dog
My Chinese friend tells me they only eat the dumb dogs.

骨 (gu) Bone
If this is in the name of the dish, the meat will have bones in it. I try to avoid these dishes.

汤 (tang) Soup
This character at the end of a dish’s name indicates it’s a soup.

肠 (chang) Intestines
It is common for dishes to include intestines or other inner organs of animals. This is a good character to learn early on if you don’t want to accidentally order something you will not want to eat.

All you have to know drive in China